One of the great things about our current era is the millions of entertainment options available at a click or tap, and even more if you are able to get yourself one of the best vpn firefox and bypass any country restrictions that some sites may place on their content. Its also one of the biggest problems we face. Sifting through the tonnage of stuff (good and bad) to find what you actually want is increasingly difficult, and its VERY easy to miss something sitting right there close enough to bite you. Of course, if you are streaming, you are going to want to make sure that you have the best internet you can possibly have so that you are able to watch the content you want without it constantly stopping and starting or, worse, cutting out altogether. Fortunately, plans from providers like spectrum internet will keep you connected no matter what so you can enjoy your viewing experience. Here’s a few eye-raising gems I’ve stumbled across on various popular streaming services just to show that digging around can sometimes really pay off:

El Santos vs. La Tetona Mendoza — NETFLIX — the long-running adult parody comic by famed Mexican satirists José Trinidad Camacho and José Ignacio Solórzano (aka TRINO and JIS) became a superbly executed animated film in 2012, complete with A-list Mexican voice talents. You’ll laugh out loud at this episodic collection of ‘El Santos’ adventures and he tries to survive corrupt officials and zombies alike while constantly failing to get into the trunks of bare-chested ball-busting luchadora Tetona Mendoza. Well translated and subtitled, too, so no excuses!

The Vampires Coffin — NETFLIX — A print just appeared of this renowned Mexican bloodsucker classic from 1958 — a perfect introduction to the legendary German Robles vampire flicks. Widescreen, as well mastered as a Casa Negra DVD, and subtitled to boot!

**UPDATE — as of October 1st, The Brainiac has been added to NETFLIX in an equally nice HD, subtitled print!**

The Man in the Golden Mask — FLIXSTER — If you have a Roku add the somewhat dodgy movie channel “Flixster” to see the rather rare 1991 French bio pic of Mexico’s famed Fray Tormenta! L’Homme au masque d’or stars Jean ‘The Professional’ Reno as the iconic priest who wrestles to keep his orphanage open. Can’t vouch for the quality here, but beggars can’t be choosers sometimes…

**UPDATE — Unless you previously purchased this title into your Amazon Video Library, the title is now unavailable. Hope this write didn’t have anything to do with that…

Boa vs. Python — AMAZON — An early entry into the way-too-crowded field of badly rendered digital creature rally movies that invest the Sy-Fy channel, this particular turd is actually digestible on a guilty pleasure level, AND it begins with a rather cheezily staged lucha libre event.

The “Herman the Great” episode of The Munsters — NETFLIX — If you haven’t seen the episode where Herman dons a burlap sack to become a masked wrestler, do so. NOW!

The “Temple of Flesh” episode of Red Shoe Diaries — AMAZON — To quote Amazon’s description: “A woman falls for a Mexican wrestler but she can’t separate the man from the mask.” She CAN, however, separate herself from her clothes, and does so often in this jaw dropping piece of cable softporn majesty. In this world of back-arched faux sex with curtains blowing in the wind, lucha libre is an underground death sport investigated by an American writer who becomes obsessed with practicing kung-fu naked in a wrestling mask and getting banged by the son of “Mil Mascaras.” Yeah, the writers were either unaware that that name was taken or thought he was long gone. This FPU staff favorite is real head slapper! Well worth any purchase price…

Mad Bull — AMAZON — NFL hall-of-famer and later father of Webster, Alex Karas, stars as a socially awkward pro wrestler whose hooded brother is killed by ring-stalker Tracey Walter. This is the sort of vintage ‘rasslin’ movie you don’t even know exists until you accidentally scroll by its icon.

Mil Mascaras in IWA and ICW 1970s — AMAZON — There isn’t a lot of outright lucha libre on Netflix or Amazon, but these chunks of wrestling history are well worth investigating. This was the height of Mil Mascaras’ ambassadorship of lucha to the rest of the globe. 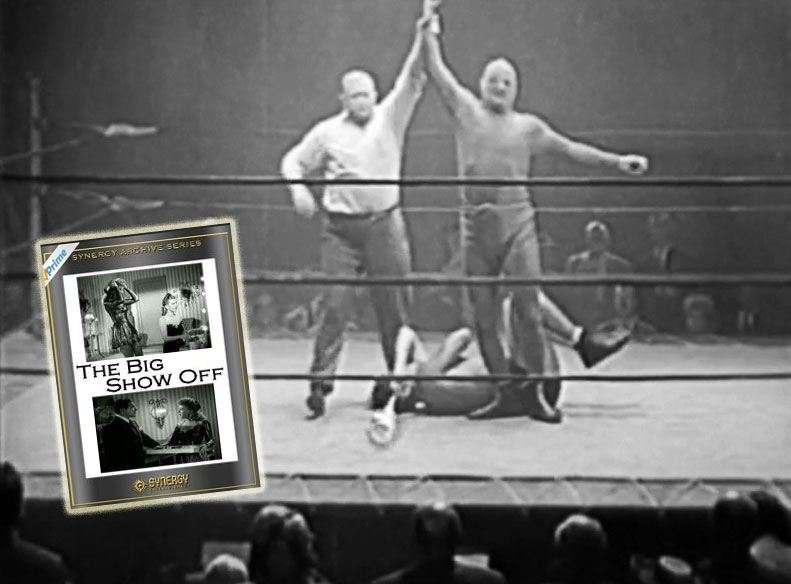 The Big Show-Off — AMAZON — This hour-long 1945 comedic drama sees nightclub singers flirting with a masked ring villain known as ‘The Devil.’ Light on ring action, but you do get some fleeting glimpses of an early masked wrestler from the wool body suit days. Doing a search for the word “wrestler” while in the Prime section will yield a few other 40’s era wrestling flicks too…

Oh, and while were looking for cheap and free stuff online, forget not that the once-thought-lost (and in some circles once thought to never even existed in the first place) adult version of Tesoro de Dracula — known as Vampiro y el Sexo — is actually sitting right there on YouTube in HD!

There’s plenty more out there, too. Drop us a line if you find some hidden gold on Netflix or Amazon!