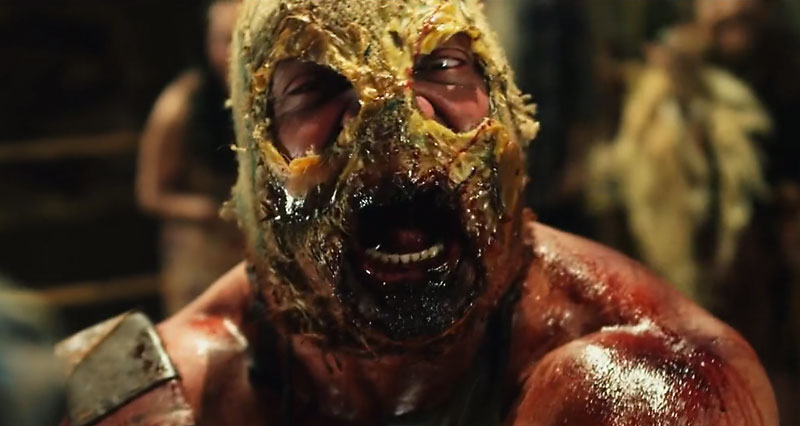 Several weeks back the short film El Gigante made its big screen premiere in LA at the Etheria Film Night festival, which I missed because Los Angeles tends to stack can’t-miss events on top of each other all the damn time, but I was sent a copy of it and shortly afterward and was lucky enough to meet the author of the book that inspired it, Shane McKenzie.

Now, my To-Be-Read stack of books is humiliatingly towering right now, plus the slave-driving asshat over at Vintage Ninja has me knee-deep in two other manuscripts for the foreseeable future, so this article will now become a plea to you all to BE A BETTER PERSON THAN ME!

Be a better person than me by reading the source novel Muerte con Carne. Go on, get in the ground floor of this thing now. Score it at Amazon HERE.

Be a better person than me by getting out to a film festival showing El Gigante. The short by Luchagore Productions (no affiliation with the Amy ‘Lita’ Dumas band of similar name) was helmed by Gigi Saul Guerrero, whose work is also featured in the Mexico Barbaro horror anthology. The short is essentially a pitch reel for a feature length version, which after a big splash at Toronto’s FantAsia film festival is major steps closer to happening.

Imagine The Texas Chainsaw Massacre but replace the cast of annoying victims with desperate immigrants (who are already victims to begin with) and Leatherface with a massive bloodthirsty modern-primitive luchador. His entourage stands in for the slaughterhouse clan, a dungeon-like ring replaces the decaying Texas gothic house, and blamo — you’ve got a bordertown bloodbath that’s making a strong impression on audiences wherever it plays.

I’m no gore-hound by any stretch of the imagination, but the original Chainsaw is pure brilliance and I love the idea of this lucha libre-infused homage. The hook for me is seeing how those elements are woven into the familiar ground of the f’ed-up killer family trope — improvised masks are crafted of burlap and rattle snake skin, wormy skulls serve as turnbuckles in a makeshift ring, etc.

I really want to see this as a full-length feature. I want to see people dressed as the characters at Chiller and Monsterpalooza. I want some sort of limited edition reproductions of the masks. I mostly want to see the lucha libre and Mexican horror elements of El Gigante raise it above the rest of the pack of often-too-derivative indie horror.

Check out the trailer below: