We lost one of the icons of the 90s international masked wrestler boom today, FMW legend and iconic high-flyer Hayabusa (Eiji Ezaki), who passed away of bleeding of the brain at age 47. Hayabusa was a colorful high-flyer with absolutely stunning ring gear and a knack for photogenic theatrical posing. He was more in the mold of a Jyushin Lyger or Great Sasuke, but did his acrobatics in the blood-stained, phosphorous burnt rings of Frontier Martial Arts Wrestling — a promotion otherwise composed of journeyman in the decline of their careers making a last run by wrestling in barbed wire and thumbtacks. The spectacle of “garbage wrestling” was as new as VHS tape trading over the internet, and that combination made Hayabusa a household world for those of us who couldn’t get enough foreign ring action. 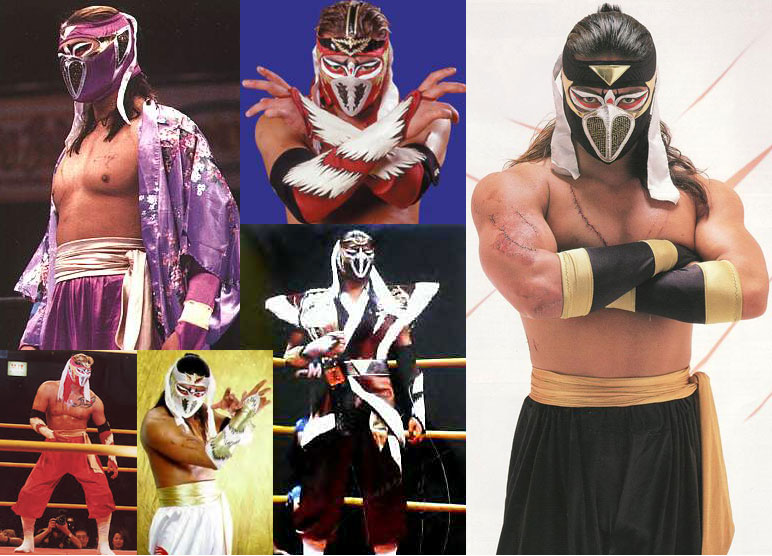 More than just FMW’s breakout, homegrown star, Hayabusa was the swan of an ugly promotion. Most any photo of him will testify the contrast between his kabuki play-inspired costuming (including the innovative hybrid of wrestling mask and face paint) and the horrendous scars and burn marks the crossed his torso like a road map. I always lamented this, he was too spectacular a personality to be on the torture circuit. He belonged in the Michinoku’s of the world. However it wasn’t high flying from ropes of barbed wire or high spots executed while fireworks blew up under the ring that ended his career. It was a comparatively safe and simple ‘lionsault’ that went wrong and landed him on his head and neck at a fatal angle that put him in a wheelchair in 2001. He endured and fought and regained some of his mobility in the last years of his life, “fighting spirit” to the very end.