The Mexican Masked Wrestler as a species was celebrated Saturday, April 11 at the colorful East LA venue Plaza de la Raza, as the inaugural La Bulla (pron. Boo-yah) event presented ring matches, Latino bands, food, drink and merch vendors and at the center of it all a gallery of upwards of 150 artists displaying a wide range of interpretations of enmascarados. 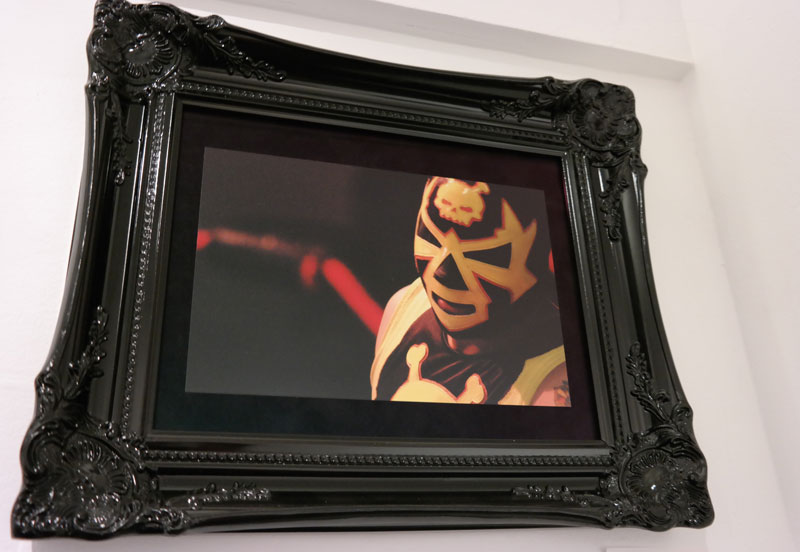 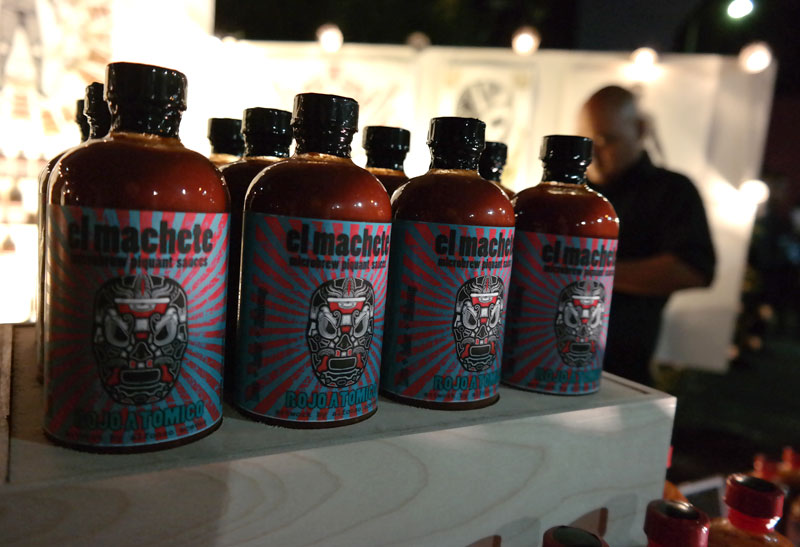 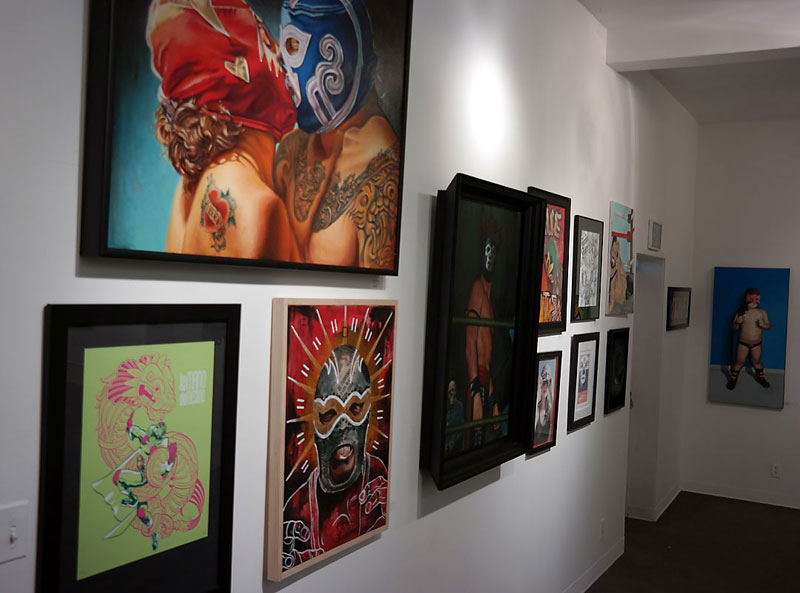 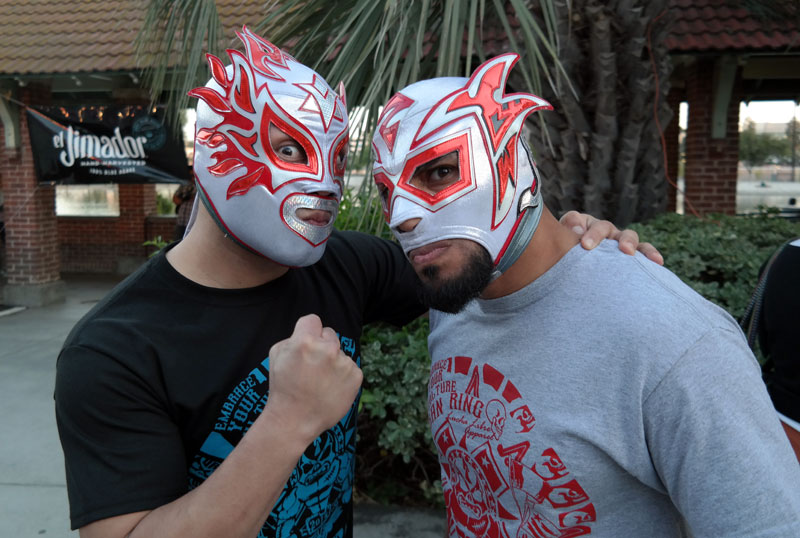 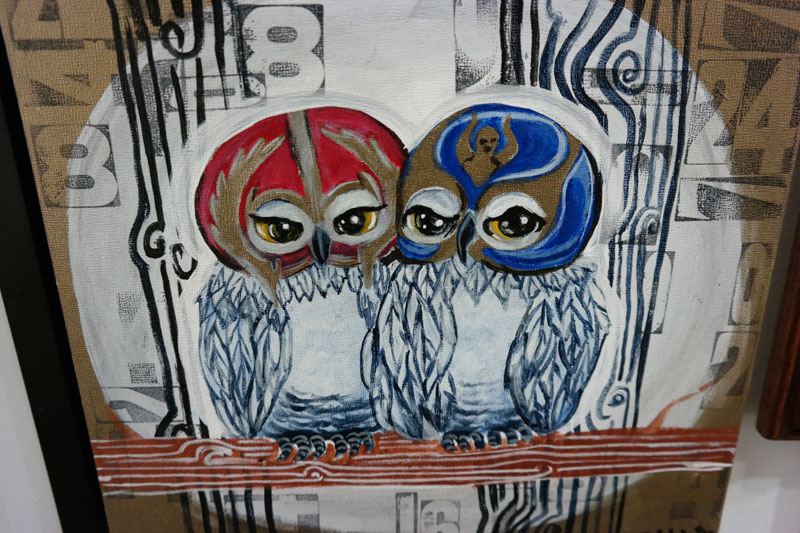 There might be nothing finer than live local lucha in the open air on a cool SoCal night, and the diverse crowd of East-Los faithful, wrestling fans, tattooed salsa-billy gals, artists and their families, car clubs and the inevitable hipster gentry mingled nicely, enjoying Jimador tequila and gourmet churro cupcakes (!!!) in equal amounts. 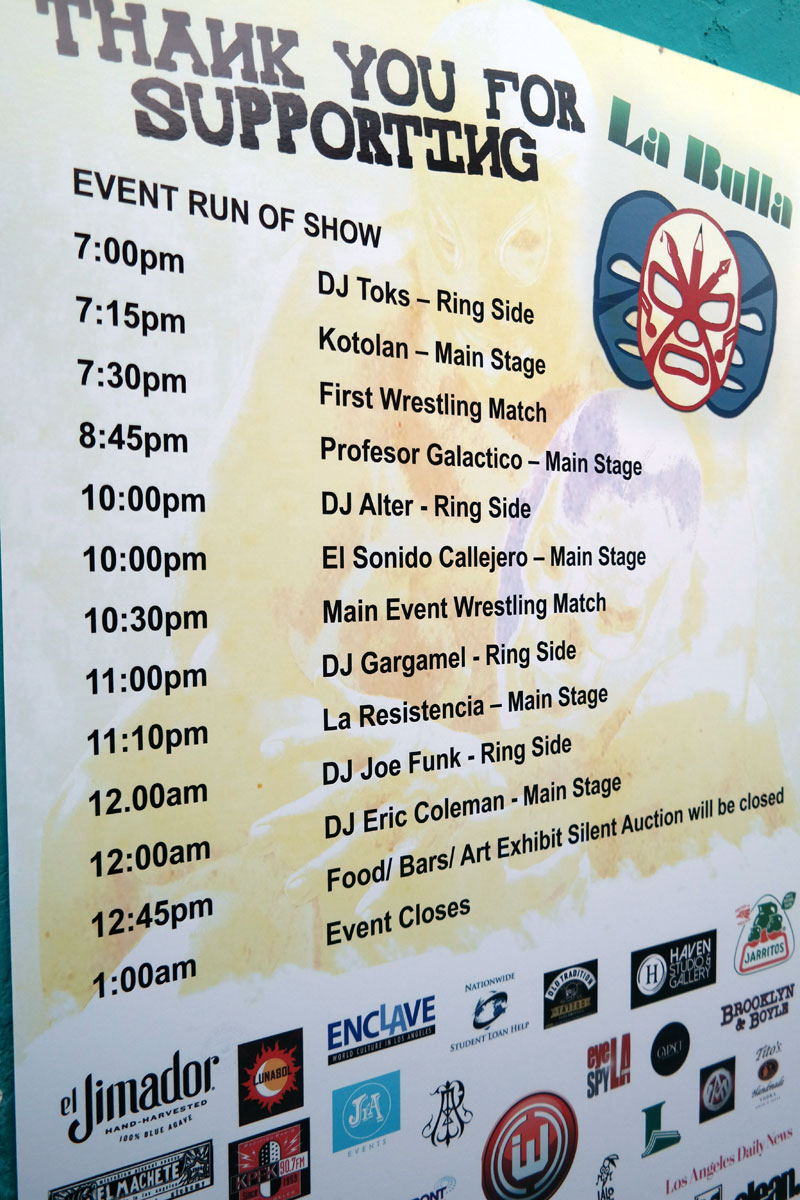 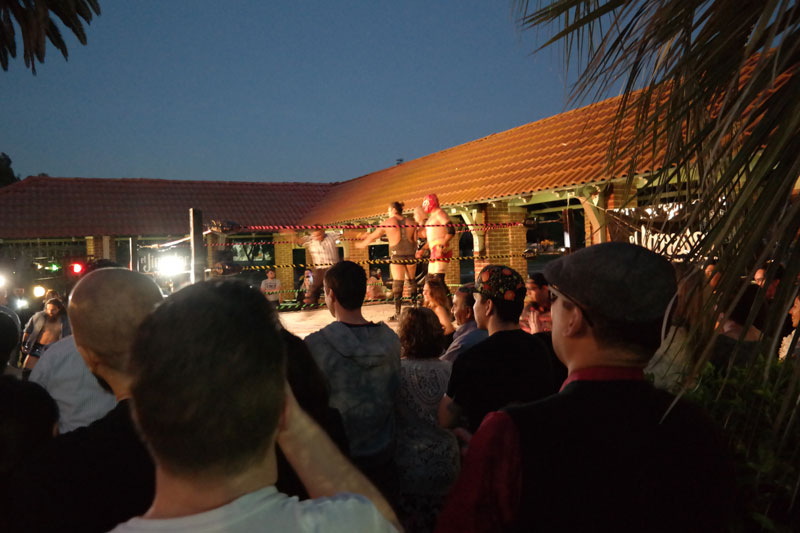 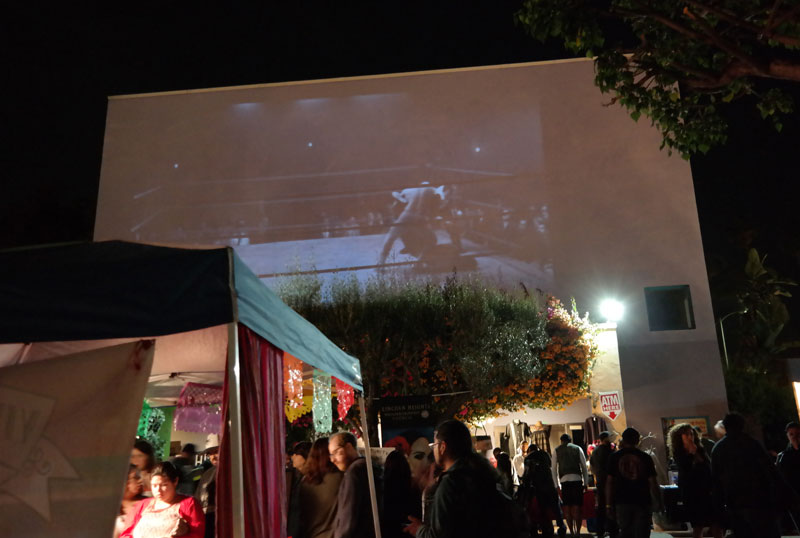 Having marketed and coordinated gallery shows for decades, this was oddly enough the first time I’d ever been invited to contribute to the walls themselves. Intimidating as hell to be in such good company, LOTS of great art on-hand! 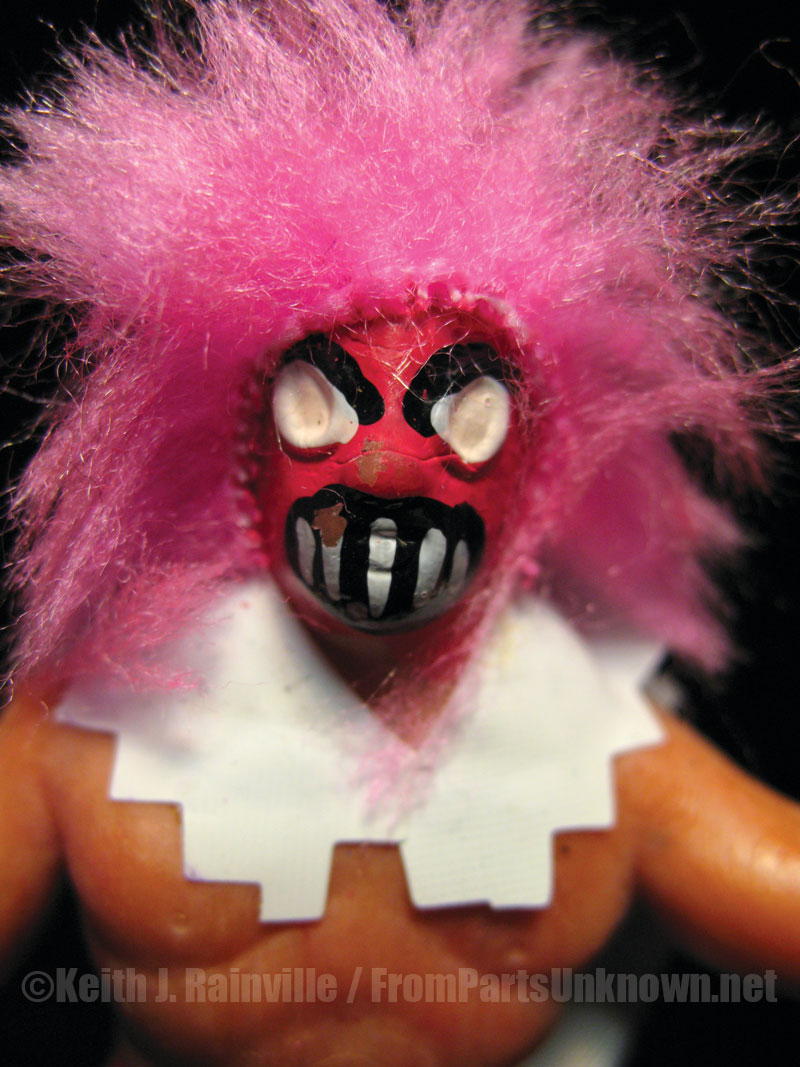 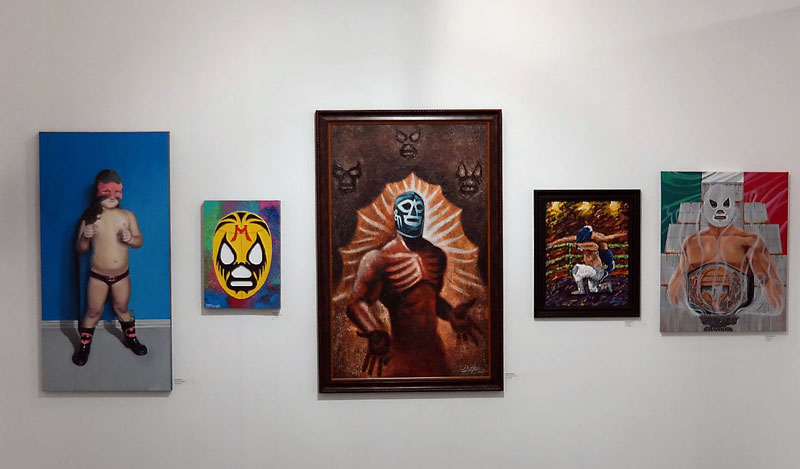 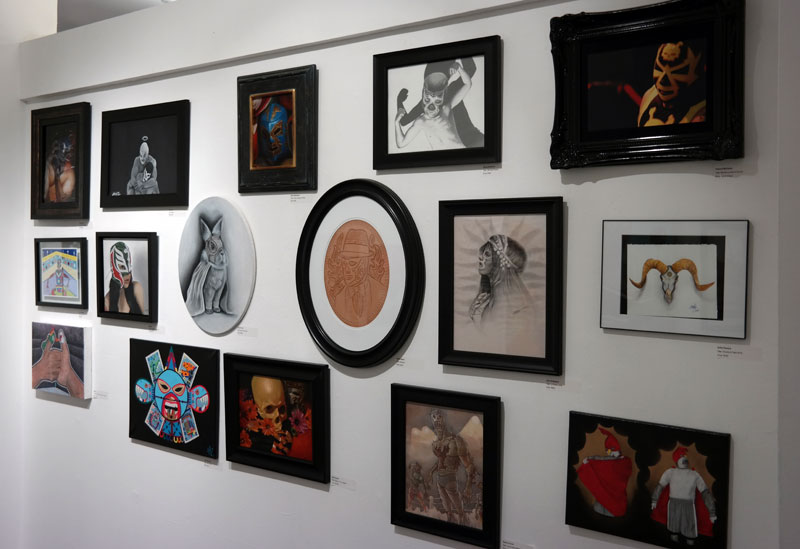 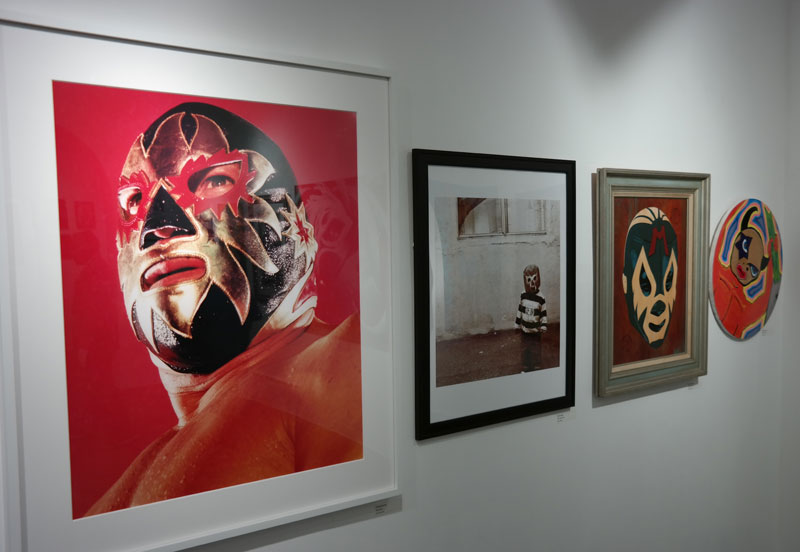 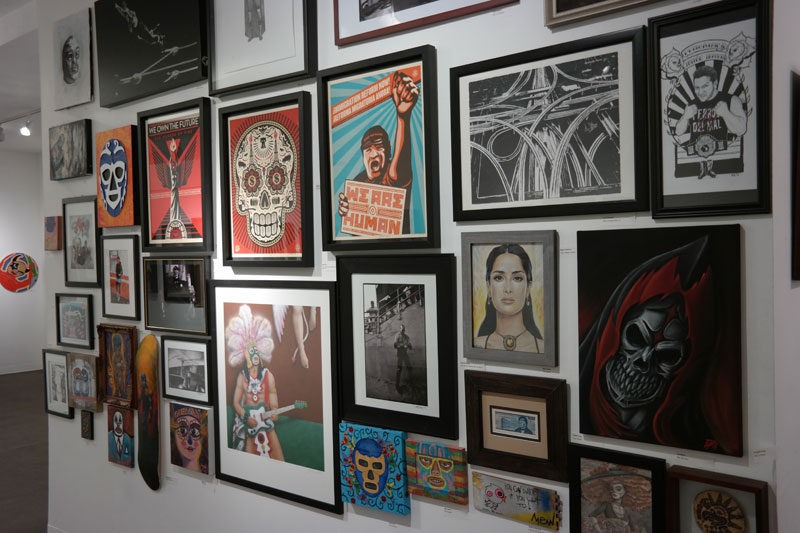 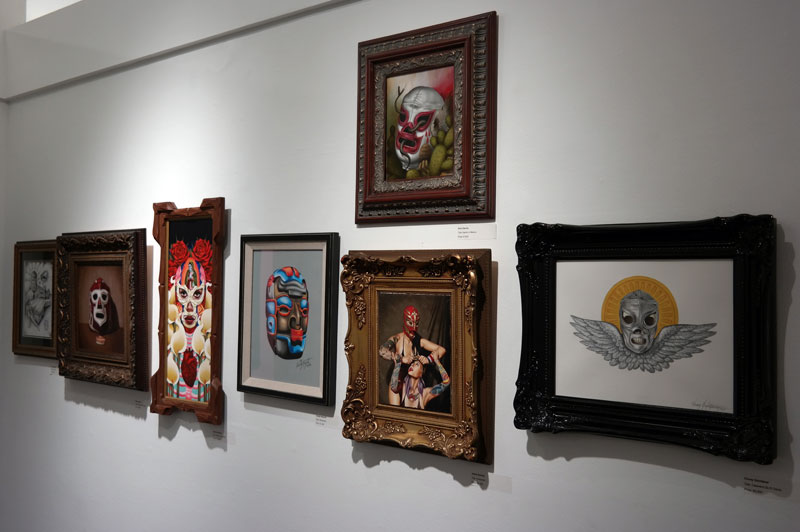 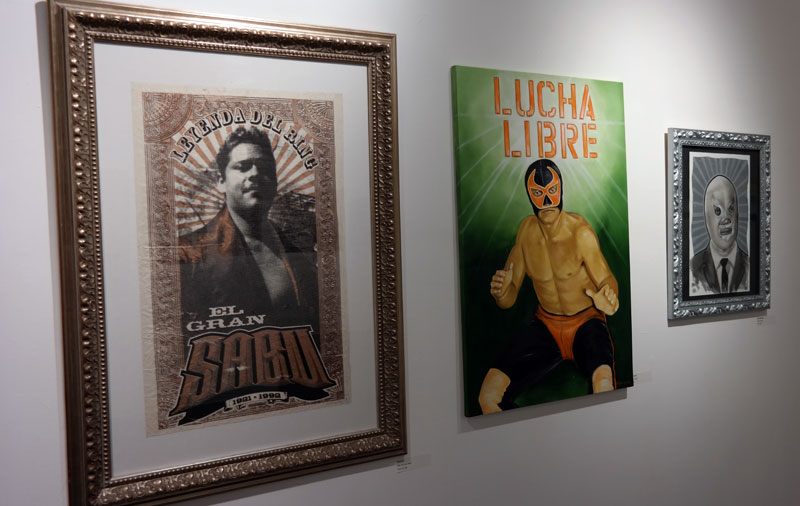 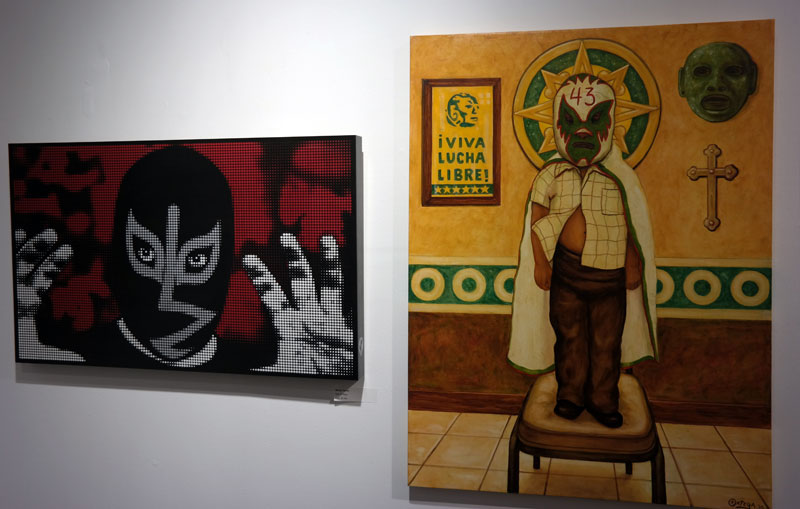 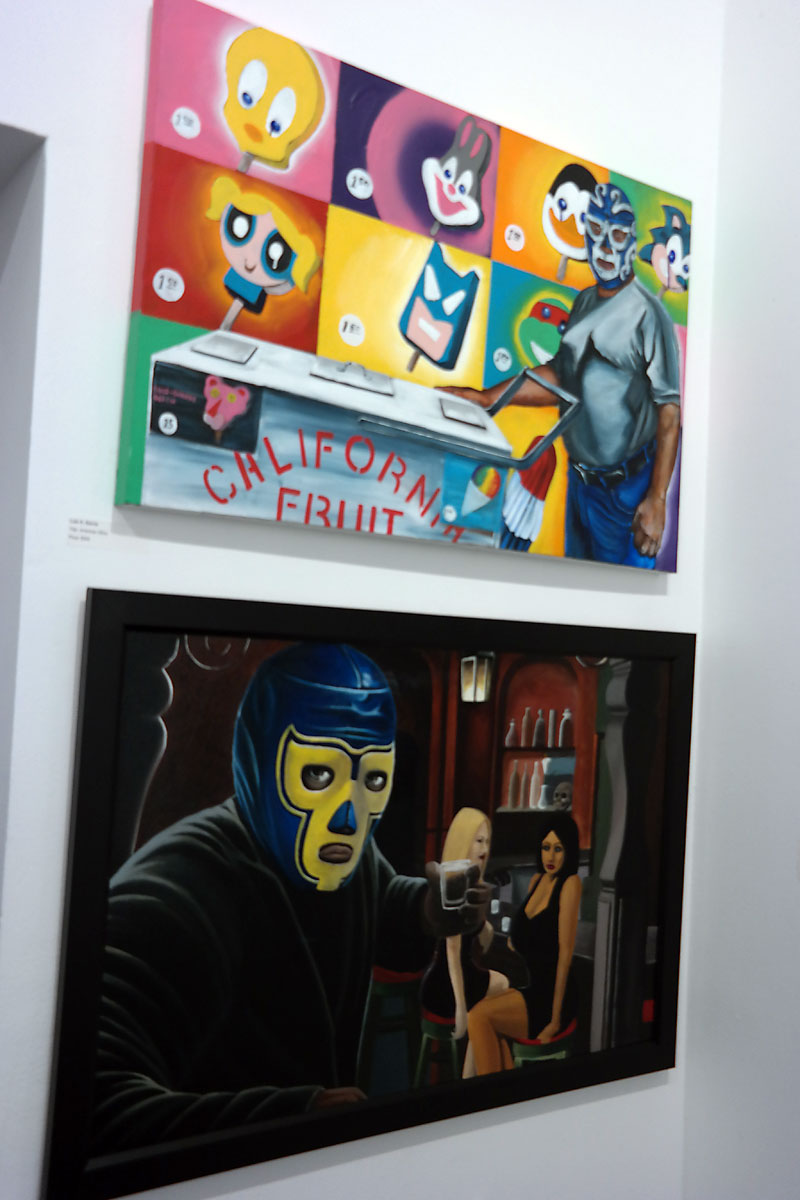 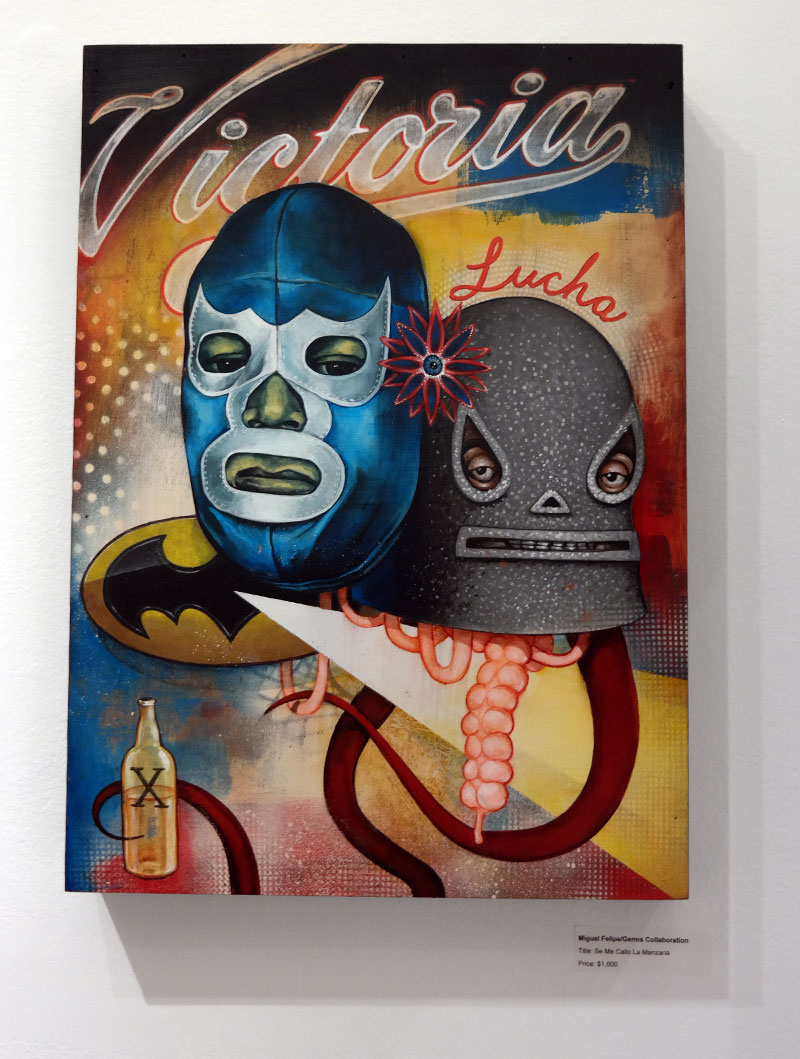 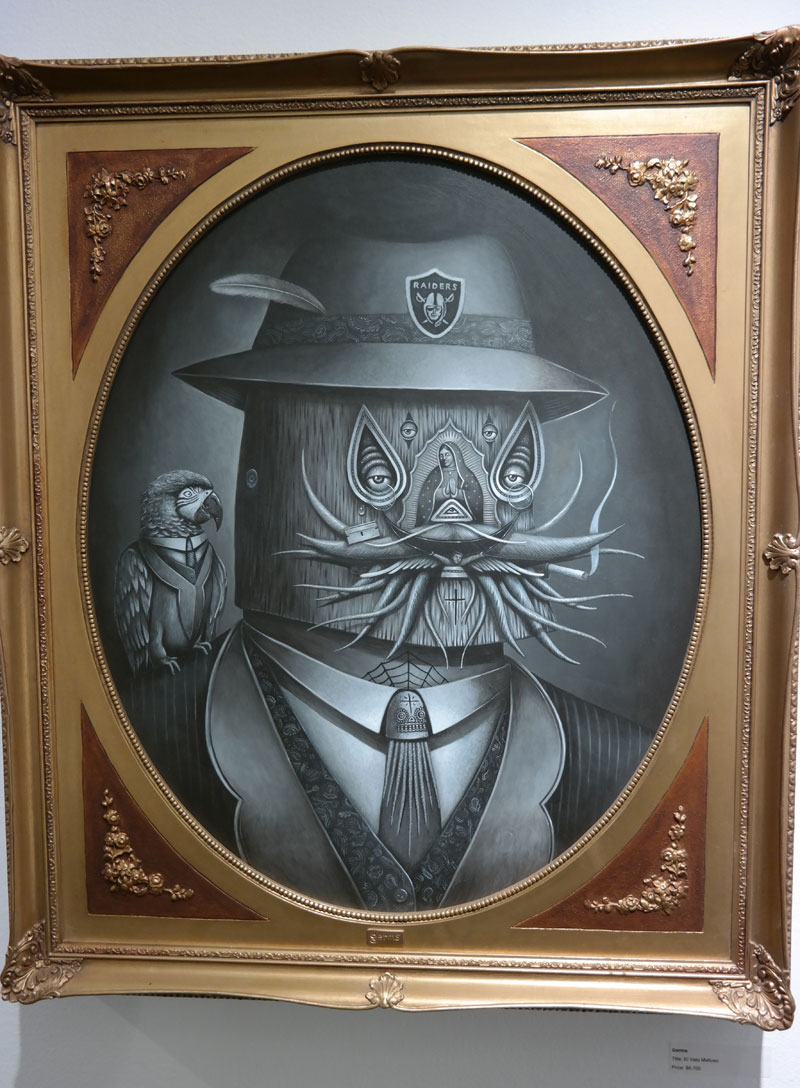 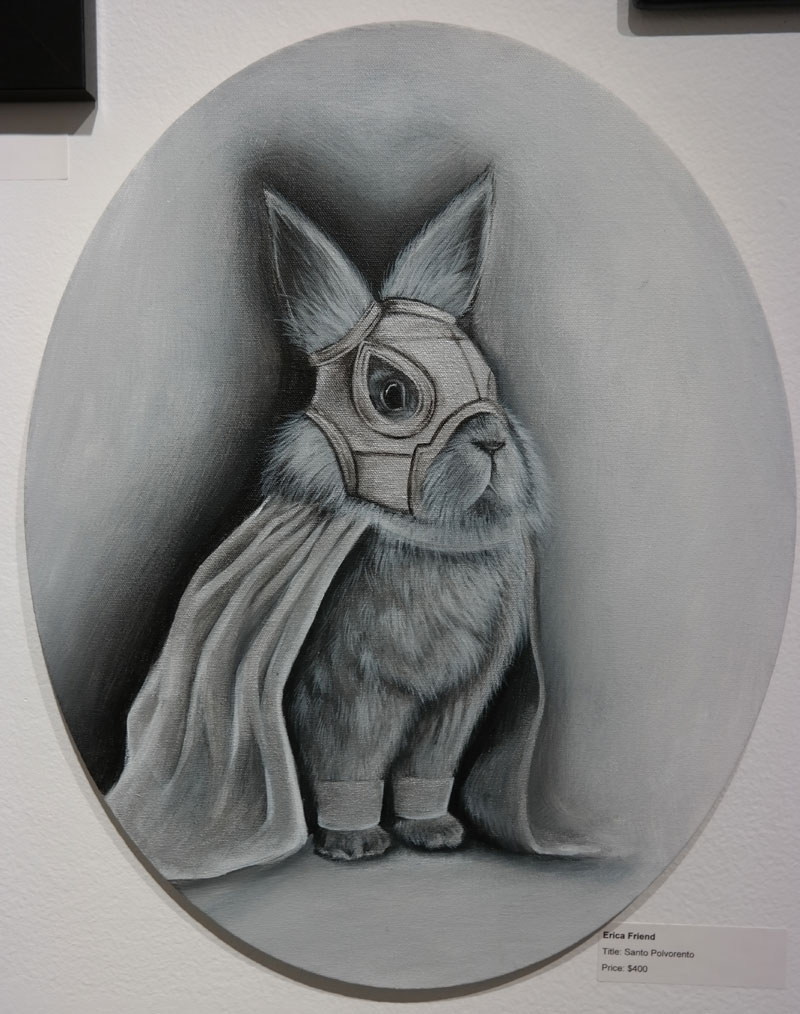 What’s not to love here?

This Santo vs. the po-po painting almost approached the psychotronic feel of Ghana movie posters.

And of course some great skulls on-hand as well. 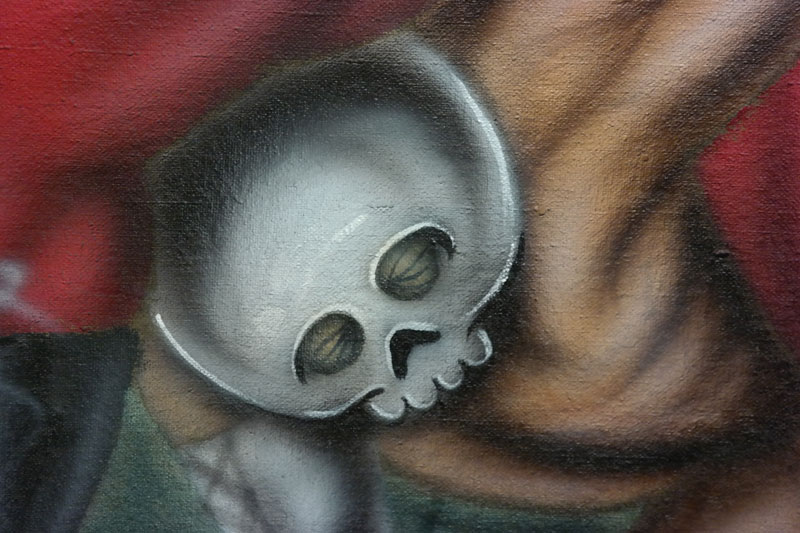 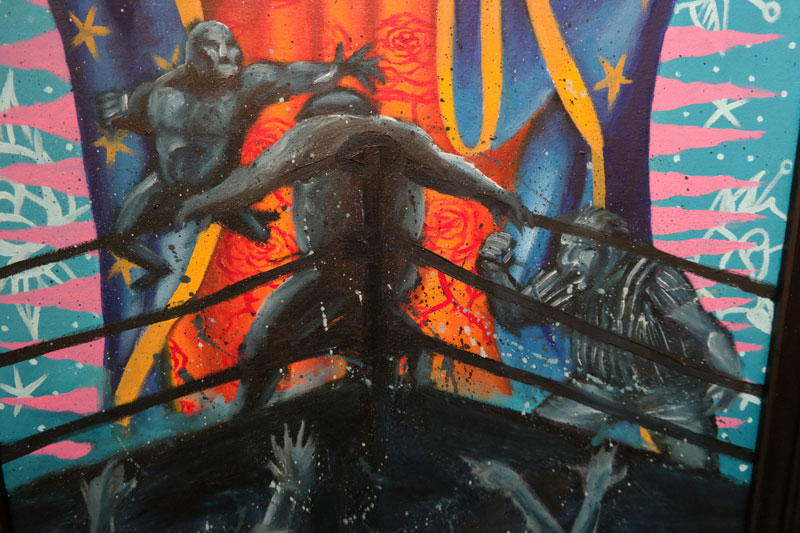 However, easily the most moving piece on display was this huge alter to the recently deceased Perro Aguayo Jr. that greeted guests as they entered. 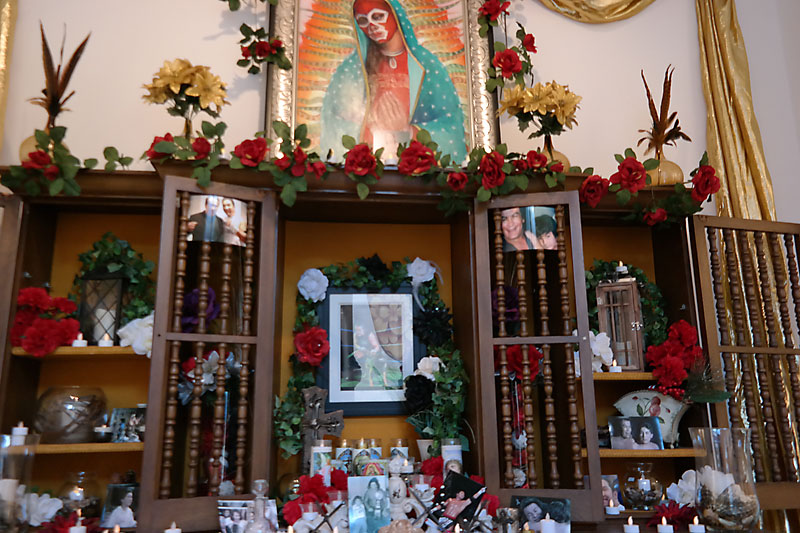 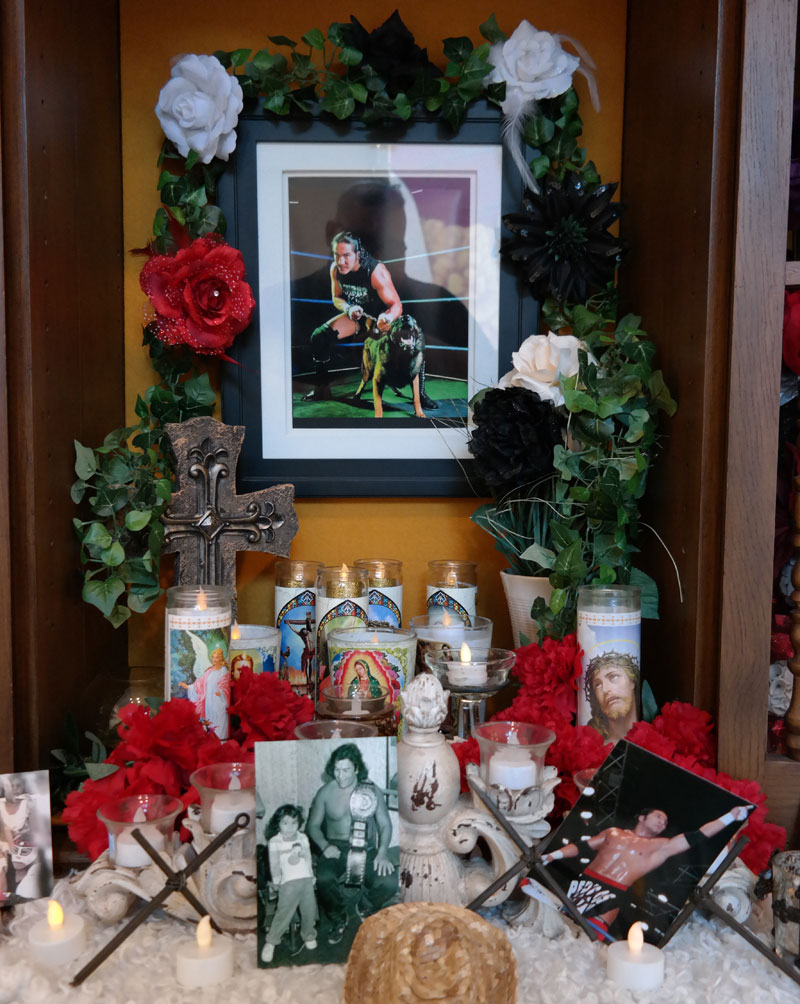 I think what I loved most about La Bulla was its seemingly effortless integration. In the 90’s magazine days of FPU, I’d get feedback from readers who too often fell into one of two exclusive camps — lucha libre fans wanting only ring action vs. lucha-hero fans who loved old Mexican psychotronic films but didn’t care about their ring roots. To me, there was never a difference — watching Jyushin Thunder Lyger battle La Parka in the ring had the same fantasy quality and visual appeal as Blue Demon grappling a werewolf in some castle dungeon. I wanted the ring, the films and for that matter the toys, art, fashions, inspired bands and any other media permutations the masks found their way into, and that’s where FPU lived (and sometimes died).

La Bulla was about the entirety of the Mexican masked wrestler’s reach. There was the squared circle, the musical stage, the food, the booze, the souvenir masks, everything. The gallery walls were equally diverse but at the same time enmeshed — enmascarados as ring gods, defenders of justice, sexualized temptations, vehicles for political messages, icons of ancient culture, low-brow kitsch, done for laughs, done for testosterone, but mostly done for the sheer love of the mask.

If you’re in the Los Angeles area you can still see the gallery at Plaza de la Raza through May 15th, and plans have already begun for next year’s show.

I know I’ll be there…

Follow La Bulla on Facebook and Twitter to see more and keep track of new show announcements, and congrats to Antonio Pelayo, Dan Madigan and the entire crew.